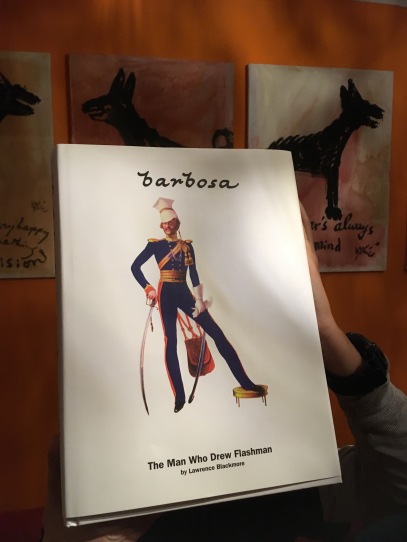 Thank you for your patience. After years of silence I’m dramatically returning with an entire paragraph of new material. I’ve contributed an anecdote to a biography of the ace illustrator Arthur Barbosa, who I came to know in his twilight years across the bar of the family boozer. Arthur’s best known works were his jackets for George MacDonald Fraser’s Flashman books, but they made up only a fraction of his output, a lot of which is reproduced here. It’s a superb volume and extremely specialist, hence the £80 price tag – which for a paragraph about as long as the one you’re reading now may be a bit much for even my most devoted readers. It would, though, make a triumphant Christmas present for the Flashman nut in your life (trust me, there’s a Flashman nut in your life), or for anybody who is obsessed with the history of dust jackets. Yourself, for example. ‘Barbosa: The Man Who Drew Flashman’ is by Lawrence Blackmore, and is available from the usual places.

In other news, I’ve been busy severing ties with Canongate Books. For some years I’d found them to be evasive when faced with basic business queries, and when it came to certain financial and contractual issues it reached a point where I just couldn’t get answers out of them. I thought this was as fishy as Milky Pimms, so decided to conduct my own amateur audit (in the absence of any knowledge of financial procedures, this involved going in like Chris-R) and – boom goes the dynamite – discovered they had chronically underpaid me. Twice.

I did not take this well.

Everything goes to the dogs when the sums don’t add up. It’s a long and rotten story, and nobody enjoys hearing other people moaning about work (I’m finding it hard not to come across like Les McQueen), so I’ll keep most of it off the front page. I have, though, written an epic account of what has gone on so far. It’s a wretched read, and the last thing the Internet needs is another incandescent middle-aged man sounding off at length about things he doesn’t quite understand, but if you’re a sucker for that kind of thing, knock yourself out. ‘The Curious Incident of the Dog & the Missing Royalties’ lives here.

Having to pull almost my entire life’s work out of print because of a publisher’s malpractice has been something of une saison en enfer. Anthropology? Gone! Gold? Kaput! This is Life? Splat! It goes on… Creatively, it has ground me to dust. With two non-showbiz day jobs, totalling around 70 hours of work in a normal week, time is hard to come by; the precious moments I could have spent loitering in green lanes have been obliterated by having to deal with this bollocks. It’s hard to muster the delicate balance of joie de vivre and hubris required to write a novel when your slumber is broken, your doublet is torn and a gaggle of exasperating Sloane Rangers are up in your grill.

There’s no need to panic though, because there are other books out there. There’s a new one – ‘Writer in Residence’ – from the wonderful Francis Plug/Paul Ewen, and if you’ve not yet read ‘Harriet Said’ by Beryl Bainbridge… well, there’s that too. And although it’s not a book, I expect you’re already among the dozens of people glued to the superb two-blokes-and-a-camcorder travelogues of Cummings Your Way. If not, give them a try. They are my favourite thing of recent years: I rate them, and I don’t say this lightly, alongside B.S. Johnson’s ‘Fat Man on a Beach’. Like most of my favourite things, I feel they deserve a wider audience. We’ve been following in their footsteps a lot, and our lives are richer because of it. We’re just back from our first trip to Lincoln, on their recommendation. Ever been? It’s marvellous. And I personally guarantee that this will make you want to go to Beverley. We’ll see you there. I’d had no idea that what my life needed was a man from Stourbridge with a dicky hip looking, through mirrored aviators, at slightly unusual brickwork, and saying into an infuriatingly erratic microphone that everything reminds him of either Belgium or Charlton Heston. Funny how things turn out.

Apart from the soul-crushing Canongate Books shitshow, all is well. We’ve spent some of the recovered money on having a spare toilet installed – those of you who share living space with other humans will understand that this is a great leap forward. I’ve also discovered, to Wife-features’ dismay, the infinite wonder of the first Hanoi Rocks LP, and have started, again to Wife-features’ dismay, fermenting my own sauerkraut. There’s no need for you to arrange a benefit concert or a sponsored walk. Were it not for my every moment being blighted by the unfolding horror of this excruciating debacle, everything would be fine.

As this hellride kicked off I was getting ready to launch into writing a highly annotated 20th anniversary edition of ‘Anthropology’, and was also working up an entirely uncalled-for follow-up to ‘When the Professor Got Stuck in the Snow’, in which a slightly different mid-profile windbag stays with a vicar. I’ve abandoned both. I am all at sea, and have no idea what to do with my back catalogue. Above all things I’m raising a family, and the bad vibes this has brought across our threshold are more than I’m willing or able to put up with. I’ve been stuck dealing with people like this for twenty years – they seem to be lurking around every corner, and I’ve had enough of them. Writing’s the only thing I’ve ever been any good at, and I love my books to distraction. I’m very sad at the prospect of them fading away, but if staying in the book trade means I’ll be inviting this kind of poison into our home then it’s just not worth it.

[‘When the Prof’ is my only book remaining in print in my own land. It’s published by Aardvark Bureau/Gallic Books, who have provided me with plausible royalty statements.]

There’s a chapter about my writing in Michael Holroyd’s new book, ‘Facts and Fiction’. In it, he says, ‘Dan Rhodes has never believed that publishers are a writer’s best friend. That has not been his experience.’

And he wrote that before all this hit the fan.