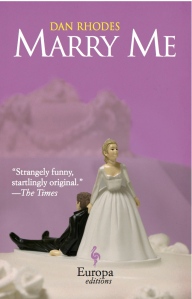 Marry Me came out in 2013. If you’re wondering what it’s all about, you could do worse than read this review in the Washington Post.

“Rum, original and seriously flippant. Going too far is Dan Rhodes’s forte. The reader is constantly and pleasurably aware that he is not a safe pair of hands. Rhodes is brilliant at overturning convention and expected emotion. He takes an idea and elopes with it… He has a comedian’s talent for the deadpan.” The Observer. Kate Kellaway’s review is a bit of a masterpiece – you can read it here.

“Some bleak, some beautiful, all darkly hilarious. To Rhodes’ fans – he’s adored by comedians and critics alike – they are tiny haiku-like jewels. They pack an elegant, occasionally devastating, punch.” This is from a vast and very friendly profile in The Independent.

“Rhodes is a bit of genius when it comes to short stories (trust us, you have to read his previous collection, Anthropology), and he’s on form with Marry Me. They’re all so brilliantly clever and funny that you’ll find yourself suppressing the urge to read them aloud to the stranger sitting next to you on the bus on the way in to work.” ***** Heat magazine. If you think we just made that up, you can read Olivia Cooke’s superb review in full here.

“Taken individually, the stories invariably raise a chuckle, usually accompanied by a wince and an involuntary acknowledgement of the truth behind the sloppy stuff of romance. But more impressively, when taken as a whole, Marry Me amounts to a bleak yet funny world view, as if P G Wodehouse and Graham Greene had got together to form a greetings card company.” Independent on Sunday

“Very funny. Rhodes’s lightness of touch, haiku-like brevity and willingness to break out the odd moment of romantic optimism makes for a fun, angst-free read.” Metro (Yes, a good review from Metro. Whatever next?)

If there’s something wrong with you, and you’re still undecided about whether or not to get the book, you can try before you buy. Click here to see a load of videos of some of the world’s leading celebrities reading out chunks of the book. 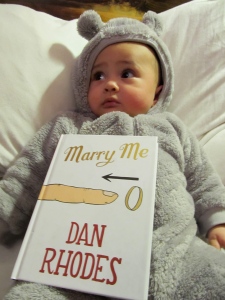 And the lovely Hungarian hardback: 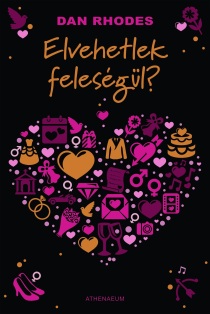