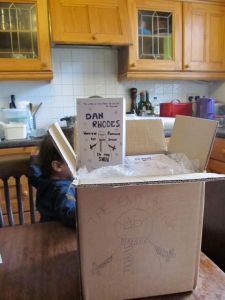 Three months ago today I finished writing ‘When the Professor Got Stuck in the Snow’. Since then I’ve printed it, published it and sold the lot. That’s a photo of the final consignment to leave the kitchen table – twenty copies on their way to Foyles on Charing Cross Road in London. They should be back on sale there early next week. There’s a list of other possible stockists here.

I’m hoping a paperback will be out in the not-too-distant future, but that very much depends on the Prof partnering up with a non-chicken publisher. Is there such a thing? In the meantime there’s the eBook, so all is not lost.

Nice press is continuing to come in – there’s been a lovely review in The Guardian (Saturday 12th April edition). And at the time of typing, all comments below the article are positive – possibly a first in Guardian history? If you’re a book pages editor and you haven’t covered it yet you must be feeling a little embarrassed. But don’t worry – there’s still time to turn things around.

I’ve kept ten copies of the hardback aside to donate to public libraries – free to the first ten librarians to email HQ here. UK only I’m afraid (postage elsewhere would be too much to cope with). Putting ‘I’m a librarian’ in the subject line isn’t compulsory but it will help. I’m old fashioned enough to feel that a book hasn’t been properly published until it’s in the library system… [UPDATE – the ten copies have now been bagged by nimble-fingered librarians.]

In other news, my 2007 novel Gold is still alive. A film adaptation is in the pipeline, but that’s top secret so we can’t mention it yet, and the Czech translation is out on 14th April. Here it is:

3 thoughts on “Last Gasps and Libraries”